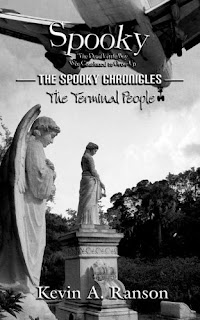 About the book:
Still growing up as a dead boy, "Spooky" Spencer Lawson is learning about the strange world he never asked to be a part of (which is a lot more interesting than math). When a mysterious stranger he meets in an alley appears to die after touching Spooky's hand, Spooky begins to wonder how dangerous he really is, especially to the people he cares about.


I found this book a really good second read in the series. It followed on nicely from the first book, pulling you along with spooky. I enjoyed finding out what was going to happen to spooky next and where his story was going to go. I find spooky an endearing character and cant wait to see what the next installment holds for spooky. This is a really well written, really good second book in Kevin's series. Spooky continues to find out more about himself and his kind, as well as learning how to deal with his new powers. Spooky encounters more bizarre goings on in this book. He even ends up thinking he is causing the strange things around him to happen, until he decides to investigate the truth, uncovering new people in his world. How will he get on will he survive.
Posted by Unknown at 12:10